In organizational life, you can’t always get what you want, especially from people over whom you have no authority. The Cohen-Bradford Influence model offers a practical process of reciprocity and exchange—trading what you have that the other person desires in exchange for what you need to accomplish workplace and personal goals. The authors also discuss some common currencies of exchange in organizational life and how to use them effectively. © 2005 Allan R. Cohen & David L. Bradford 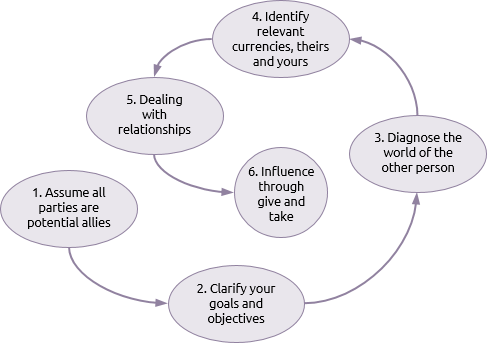 How can you influence those over whom you have no authority? The short answer is that to have influence, you need resources that other people want so that you can trade for what you want. This key to influence is based on a principle that underlies all human interaction, the Law of Reciprocity.

This model bases itself on the law of reciprocity, or the belief that all positive and negative things done pay back over time, or that one good or bad thing deserves another. For instance, doing a favor obliges the recipient of the favor to return in kind at a later date.

The Cohen-Bradford Model is a six-step approach to control behavior at work.

This article is based on the book Influence with out Authority By Allan R. Cohen and David L. Bradford

I spent an hour with my 5-year-old for his online school day 2. They are using @Google meet for their inline instructions. I believe there is definitely some room to redesign the UI so kids can easily interact with the functions. Like Mute, unmute,

Next @AgileLoudoun online event is with the Awesome @RealChrisLi looking forward to see you all there. Join @RealChrisLi at Are we really a Team? - What questions to ask! meetu.ps/e/J9s1d/2WFsN/a

Once you question your own belief, it's over.

@Airtel_Presence Thank you. I sent DM.

@airtelindia someone used my email address to get new phone connection. I am getting notified over the email for each change which is being made. I am@not sure if there is something I can do to stop that. Please advise.